This morning in Washington, the robocall issue continued to heat up in advance to the FCC-FTC’s Stop Illegal Robocalls Expo that Hiya will be be attending this coming Monday.

U.S. Senator John Thune (R-S.D.), chairman of the Committee on Commerce, Science and Transportation, led a hearing entitled, “Abusive Robocalls and How We Can Stop Them,” where government officials from the FTC, FCC, and U.S. Chamber of Commerce, responsible for stopping robocalls and an individual, Adrian Abramovich who had made over 100 million robocalls in a span of three months, were questioned about spoofing, the measures taken by the government and industry to protect consumers from robocalls, and insight on the technology behind robocalls.

Prior to the hearing, Senator Edward Markey (D-Mass.), author of The TCPA of 1991, was joined by 14 other Democratic senators in writing a letter to FCC Chairman Pai urging the FCC to take further action in stopping robocalls after a D.C. Circuit Court of Appeals ruling last month struck down portions of the FCC’s TCPA. Throughout this mornings hearing Markey, repeatedly emphasized the FCC’s need to focus on two key actions:

To watch the hearing in full, click on the video below: 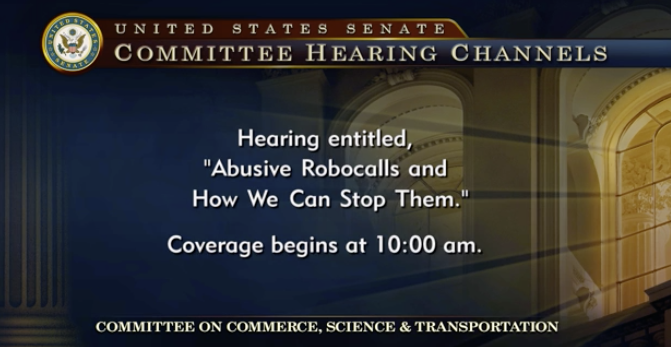