What is Adaptive AI?

Spam and scam calls hurt everyone: consumers and businesses are annoyed or defrauded by them, and phone service carriers suffer damage to their reputation when fraudsters use their networks to cheat people out of their time or money.

Spam and scam blocking services do a great job of reducing these types of calls. If a phone number has a history of being used to make scam calls, the call can either be blocked or identified as spam or possible fraud. But what if there’s no history? Fraudsters are constantly using new numbers. That’s where Adaptive AI comes in.

In a survey of more than 12,000 consumers worldwide, only between 16% and 38% of respondents said they thought their phone carrier was doing enough to reduce spam and fraud calls. Watch the 2022 State of the Call webinar for more details.


In November 2021, Hiya launched the industry’s first self-learning call protection system that proactively hunts and shuts down illegal callers in real-time. Adaptive AI observes the patterns of spammers in network traffic and adapts to block them without the need for historical data or for data scientists to add new models to the system.


Adaptive AI is informed by live data streams from wireless carriers, smartphone devices, and apps. It evaluates every call to look for new patterns that would indicate whether the call is spam, including which carrier originated the call, what country it came from, and if its network signature indicates spam risk. By constantly monitoring these patterns, Hiya’s system is able to detect spam calls based on shifting tactics instead of relying on phone numbers and historical data.

Hiya regularly tests the performance of its call protection service against other services on the market by using a collection of live phone numbers with subscriptions across all the major carriers in the US. In a recent test, Hiya detected an average of 28% more spam calls than other call protection services. 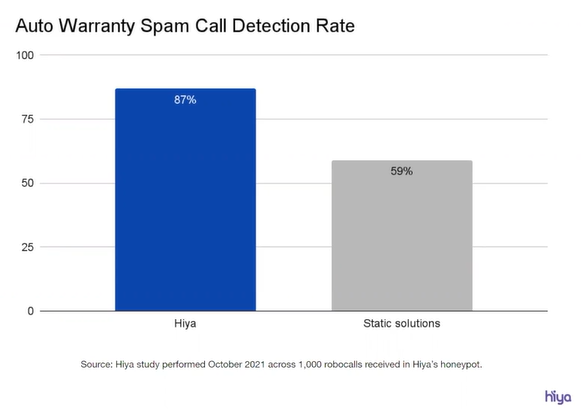 
Adaptive AI used to shut down the latest scam


Hiya’s Adaptive AI also proved successful in detecting and shutting down one of the most recent scams, this one dubbed the “Eavesdropping Scam.” In this scam, the caller leaves a vague message, saying to another person “I’m trying to get ahold of them right now.” It relies on the victim being so interested that they call back. Once the victim calls back, the scammer can run a variety of scams, most commonly offering fraudulent tax relief services.


This scam first emerged in early 2022. Using Adaptive AI, Hiya fagged more than 90% of the calls from day one. On average, phone numbers making the Eavesdropping Scam call were flagged in fewer than 12 call attempts. After successfully detecting and flagging these calls, Hiya collaborated with a third-party service provider to shut down the initial operation in 24 hours.

To learn more, send us an email.