Scam of the Month: The Wangiri Scam

The caller hung up.

Welcome to the Wangiri scam — one of the world's most popular scam calls. In Japanese, Wangiri translates to “one ring and hang up.” That’s exactly what happens in this sneaky scam. The scam is rumored to have originated in Japan, but the same type of one-ring phone scam has been around for years, with calls originating in many countries.

When the Wangiri scam arrived on the market, it took a while for scam experts to figure out that it was happening — mostly because the only indicator was a large volume of calls over a period of a few days, originating in a foreign country. The calls only include a single ring and then the caller hangs up.

Why does the Wangiri scam work?

Scammers are banking on a percentage of the people they call seeing that they have a missed call from an unknown number and calling back. When these victims call back, the scammer has tricked them into unknowingly calling back to a Premium Rate Number (a PRN), and international fees are applied to the call. Each moment that the victim stays on the line with the scammer, they are incurring fees — so the job of the scammer is to keep the victim on the line for as long as possible. 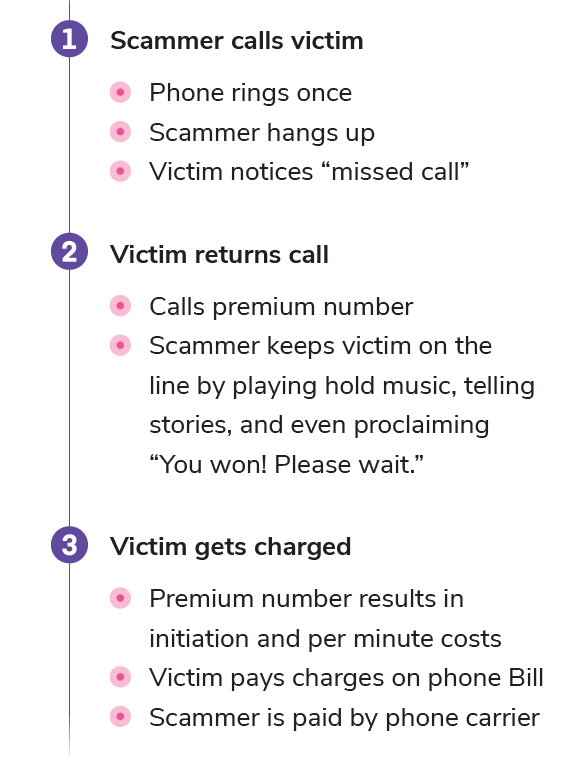 The Wangiri scam is one flavor of “International Revenue Share Fraud,” or IRSF. Often considered the single-most prevalent phone scam, IRSF abuses the fee structure between service providers for connecting calls. The more calls connected, the more fees paid to the recipient carrier. Providers of Premium Rate Number lines in particular stand to gain a lot of revenue by increasing traffic to their premium lines — and some aren’t concerned if that traffic is actually valid, or from the Wangiri scam.

How widespread is the Wangiri scam?

The Wangiri scam has amazing reach. Nearly every country around the globe is observed to be getting suspected Wangiri call traffic, with up to a million possible Wangiri calls globally every day. It is truly an internationalized version of phone fraud.

The countries originating Wangiri attacks have varied over time and vary by the country being targeted. Many of the original “one-ring scam” calls originated from Central American islands, taking advantage of the shared +1 dialing code with the United States to hide the fact that the calls were actually international. But the scam has expanded greatly from there.

Hiya’s recent analysis of March and April of 2022, shows that nearly 30% of suspected Wangiri calls originated out of Africa, and more than 20% from the Southeast Asia region and neighboring South Pacific islands. However, the Caribbean does hold on to its “one-ring” roots, accounting for more than 5% of the scam globally and 12% for Wangiri calls to the United States.

However, as the Wangiri scam often operates in massive traffic waves through targeted and short-term waves, the top countries change very quickly. That’s why Hiya has built a responsive, versatile solution.

How Hiya is combating the Wangiri scam

With the broad, worldwide reach of the Wangiri scam, it’s doubtful that anyone can put an end to it soon. But there are definitely ways to identify these calls before someone picks up the phone, or to block them before they even reach the phone.

Hiya’s dedicated Wangiri protection system is part of the larger Adaptive AI engine that powers all of Hiya’s spam analytics. This service continuously monitors suspicious Wangiri call patterns between all countries around the globe, spotting the early signs of a new campaign and quickly flagging or blocking the scam attempts. Thanks to the adaptive nature of Hiya’s AI engine, it can perform this protection even against the popular call-forwarding tactics that let the scammers hide in seemingly-legitimate call traffic.

How to fight back against scam calls

Carriers can protect their customers from phone scams by adding Hiya Protect, which blocks or labels spam and scam calls with high accuracy, without blocking essential calls. It is used by phone carriers, mobile phone manufacturers, and network providers who are looking to create a differentiated voice offering and increase customer satisfaction.

Enterprises can help their customers feel safe answering the phone by adding Hiya Connect, which enables businesses to display their company name, logo, and reason for the call on the recipient’s mobile phone. Branded caller ID identifies who is calling so customers will not be afraid to answer their phones.

Individuals can check with their phone carrier to see if it offers spam/scam blocking capabilities. If not, ask your carrier to consider adding Hiya Protect.