FCC (and Hiya) Cracking Down on Auto Warranty Scams

Earlier this year, we looked into the popular auto warranty scam and its impact on businesses and consumers. Based on our data, we estimated that approximately 2.5% of all calls received to the Hiya Honeypot (Hiya-owned phone numbers used to capture the content of spam calls) were the auto warranty scam. That’s an average of about 10 million calls per month since the beginning of 2022. Now, the Federal Communications Commission (FCC) is taking action.

The FCC announced that it has opened a formal case and is investigating a Panama-based company that appears to be responsible for more than 8 billion unlawful robocalls to American consumers since 2018. The investigation and lawsuit are part of a series of actions led by the FCC to cut off a flood of potentially illegal robocalls marketing auto warranties.

“Billions of auto warranty robocalls from a single calling campaign. Billions!” said FCC Chairwoman Jessica Rosenworcel in a recent press release. “Auto warranty scams are one of the top complaints we get from consumers and it’s time to hold those responsible for making these junk calls.”

Hiya’s data shows that the auto warranty scam was the number one phone scam of 2021 and it continues to rank number one in the top scam calls of 2022 so far. Hiya has blocked millions of auto warranty calls and is using new tools to further combat the scam.

One tool that has proven to be very effective in stopping the auto warranty scam is Hiya’s Adaptive AI, an innovative feature of Hiya Protect, a call protection service used by carriers, phone manufacturers, and the Hiya app. Adaptive AI goes beyond simply blocking known spam numbers; it uses machine learning to target the tactics of scammers, proactively hunting and shutting down scam campaigns in their earliest stages. 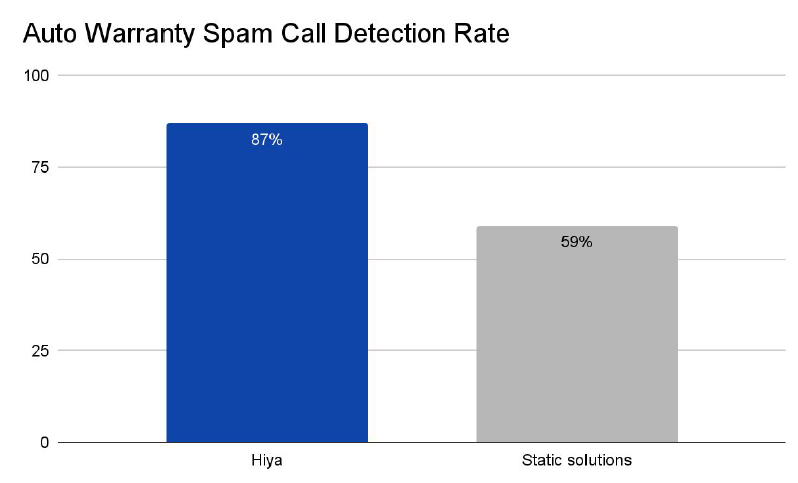 In a Hiya study performed in October 2021 across 1,000 robocalls received in Hiya’s honeypot (Hiya-owned phone numbers used to capture the content of spam calls) Hiya’s Adaptive AI was about one-third more effective in detecting auto warranty calls than solutions that don’t use Adaptive AI.

In an effort to stop auto warranty scam calls, the FCC’s Enforcement Bureau is taking these steps:

MasMovil and Pepephone: Hiya's foray into the Spanish market

Hiya has partnered with Pepephone to become the first mobile phone carrier in Spain to offer Hiya’s ... >