In 2020, people became more accustomed to putting more physical distance between them for the sake of social distancing -- but this couldn’t keep them from seeking out human interaction, specifically by communicating over the phone for both personal and professional interactions. In fact, according to Hiya’s State of the Call Report, over the past twelve months, voice traffic increased by 184% as people made clear that they prefer to use the voice call over all other methods of communication.

But with this growth in phone usage also came an increase in fraudulent calls and phone scams. Consumers received an average of 144 spam calls last year, with 58% of those calls fraudulent. For the Financial Services industry, this meant needing to manage and protect the highly lucrative voice channel within the context of an increasingly complex customer journey, one that almost always involves multiple touch points. Consumers may gravitate toward using mobile apps or chat for many of their banking needs, but there will always be those who prefer — and sometimes even require — speaking to a live agent to handle more complicated transactions.

Hiya’s new report, Key Trends Affecting Customer Contact Performance in Financial Services, presents key findings that are designed to provide a better understanding of the state of the voice channel in this vertical. With this data, financial services professionals can continue to provide consumers with the best experience possible, all within the context of a truly omnichannel customer journey.

Here are four insights from the report that you won’t want to ignore:

2. Because of increased spam, fraudulent calls, and/or spoofing, consumer trust is fragile in this vertical.

Sixty-two percent of US consumers surveyed say they have received a call from an impersonator spoofing a legitimate business at least once, and almost 40% of US consumers surveyed say that the impersonator claimed to be operating in the Financial Services sector. With alarming numbers such as these, prioritizing the protection and optimization of the voice channel should be of paramount concern to financial services firms.

3. From brand loyalty to decreased productivity, fraudulent calls are threatening the most critical KPIs in the financial services sector.

Ninety-two percent of financial services workers believe that the voice call has become more important than ever, yet 54% of this same group of respondents said their business has been spoofed by an impersonator. Forty-eight percent of consumers say spoofed calls make them suspicious of any calls coming from that business -- this translates into one of the biggest threats to brand value and loyalty.

What’s more, 80% of financial services workers surveyed said their business has been negatively impacted as a result of not being able to reach customers via phone, with productivity (58%), customer satisfaction (44%), and efficiency (56%) being the top affected areas.

4. Those in Financial Services feel many are to blame for spoofed calls, but that businesses should fix the problem.

Seventy-five percent of financial services professionals know that their calls are being marked as spam or blocked as fraudulent. As for who is to blame for spoofed calls, these same professionals believe the majority of the fault lies with the spammers and fraudsters themselves (58%), followed by device manufacturers (33%) and the government (33%). Regardless of where people perceive the fault to lie, what is interesting is that 54% of financial services professionals believe that businesses should fix the problem.

All of these trends point to the fact that consumers will continue to rely on live human interactions to address their customer service needs in this industry, but there are numerous threats to the customer experience that exist as a result of fraudulent calls. Because of this, those in the financial services contact center must prioritize contact center performance, ensuring that they can meet and exceed customer expectations, all while maintaining the strong level of consumer trust they have worked so hard to build. 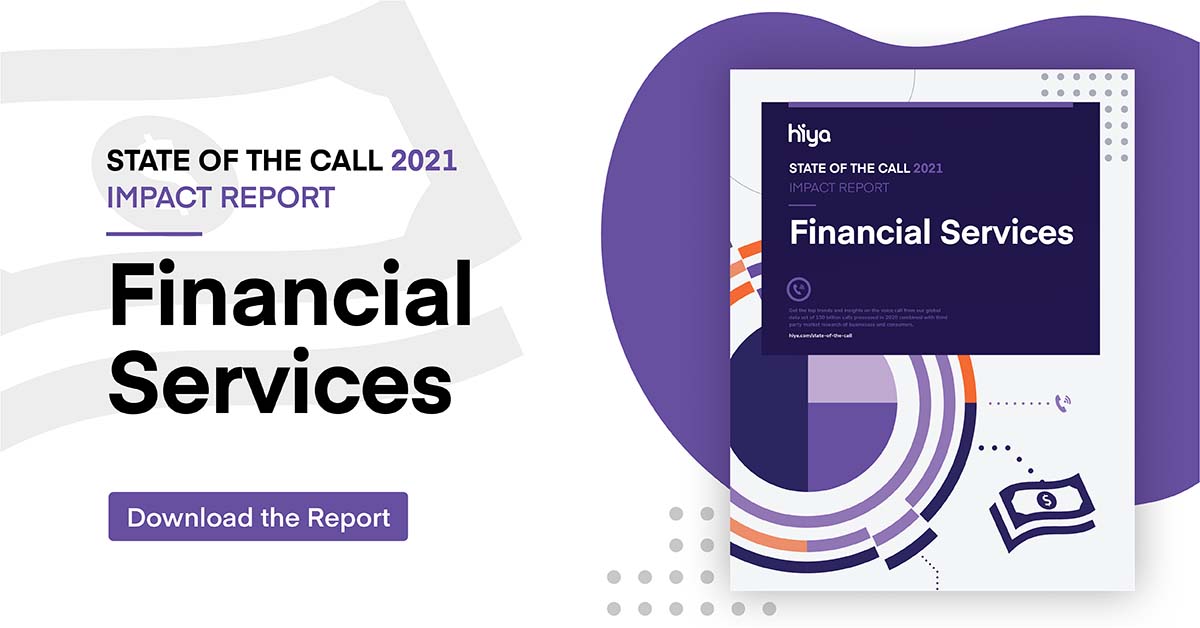