Last Friday, the FCC and FTC hosted a joint policy forum on “Fighting the Scourge of Illegal Robocalls. The event highlighted the actions carriers and other agencies have taken to protect consumers from unwanted calls.

Hiya Founder & CEO Alex Algard spoke on the “Solutions and Tools for Consumers” panel at the event. Here, he discussed:

See below for full details of Algard’s discussion:

I am going to focus on the tools that our wireless carriers have in place now, that are not dependent on a customer necessarily downloading an app, and then I will get into the app ecosystem, which has exploded. AT&T launched a product called AT&T Call Protect in 2016. It is a free network service that allows customers to automatically block suspected fraudulent calls. It flags suspected spam calls so the customer can choose whether to answer it or not. Using an interface provided by the AT&T Call Protect app, customers can manually block an unlimited number of telephone numbers for 30 day intervals. You can download the app across the ecosystem or on the AT&T website. AT&T on the wireline side also made Call Protect available to its IP home phone users, and Alex will talk about this. They have partnered with Hiya and to date, they have blocked 3.5 billion unwanted robocalls.

Our company is called Hiya, we have an app that you can download. There are a lot of choices for consumers, over 500 apps, which is pretty astounding. I think the app stores are pretty effective in guiding consumers to the more effective apps. I am more concerned that in the U.S. market, the iPhone is a bit crippled relative to what Google has done to the Android side. For all of us in the room, if you were to download an Android app that is well rated, you can probably avoid most nuisance calls right away. On the iPhone, you go to settings, and then a phone menu, and then you get down to Call Blocking Identification. Most consumers do not understand that. I think about half of the U.S. market, even though there are good apps available for iPhone, most consumers are unable to activate the services. That is a problem. Otherwise, I think on the operator side, we are very excited to be working with partners. What I am concerned about is the industry’s ability to find the right solution, and it certainly does not have to be ours. I think this is such an important issue, we have got to solve this issue. One is how soon, the spoofing issue is huge. There is a lot that companies can do to combat bad callers and spoofing as well. But how fast can we actually move along on this? I think Jim (McEachern, Senior Technology Consultant, Alliance for Telecommunications Industry Solutions) and Alex (Quilici, Chief Executive Officer, YouMail) are doing great work, and we are eager to see something great coming out. How can a governing authority be placed into action? That is the foundation that will make that market stronger, if the spoofing issue can be dealt with, the foundation of hundreds of companies are building this.

There is pluses and minuses in having lots of things to choose from. On the one hand, it is great. You can sort through it. Anybody can comment on what the consumer’s reactions or experiences have been with this? Have they been effective?

We talked about the apps that have high ratings. Some of the solutions by the carriers have been very effective. At least 6 billion phone calls from bad actors are being blocked recently. It is starting to work. There is a lot more work that needs to be done still. I am always concerned about, maybe some actors, some companies being overly aggressive in too quickly fighting the bad robocalls. I think really what is needed is a scalpel in terms of threading out bad callers from the good ones.

How do you distinguish a bad actor? The things you want to block from the things that should get through? Can you say a little bit, for consumers, about how does this work, so that I make sure, maybe some choose to take the bazooka, but others, like I talked about, maybe this is a call I really wanted to have come through, how do you sort those?

Our team in Seattle has a whole set of advanced algorithms to use, machine learning techniques in a real-time basis to detect for a sign of reputation. It is really a daunting technical challenge. One of the things I am excited about is we do not actually have a so-called blacklist. We are looking at every call as an event on its own, and depending on what else we have seen on the network, we may choose to assign the call a bad or good notation. The worst reputation would result in a call being blocked. Very few calls are not being blocked and have that reputation, those are the ones that get a lot of attention and rightly so, because those can be dangerous. That could be a fake IRS agent demanding money. We are seeing a great increase compared to last year. Then there are calls we consider spam or nuisance. Then it is subjective. When an unknown call is coming through, there is a 50/50 chance the person will want to receive a call from that person. I think there has been instances about school alerts. Of course, it is important to receive those. Given that our company is premised on fighting these bad calls, I can say comfortably that there is other examples too. I changed my credit card recently, and had our service locked out, either my service would have been terminated or my credit rating would have gone down. It is important that some of these calls get through. There are 2 million people who are doing important work and need to get through to consumers. We take the false-positive thing very seriously. Our reported false-positive rate is 0.1% and we are proud of that.

The number that looks like it comes from New York and it is spoofing, are the things we have been talking about effective against spoofing? How do that come into play?

There is a bit of a myth out there that nothing can be done for spoofing unless Shaken is fully implemented. We are seeing almost 30% of nuisance calls today are the so-called Neighbor Spoofing Scam. These are typically spam calls. If you are not familiar with it, it is basically these bad actors calling you on whatever number you have. The originating number has the same six digits, sometimes it has all the same numbers. Usually, it is the first six digits. We have some techniques to thread that out. The clumsy technique would be to block any call that comes in from those first six digits, but then you might block out people who randomly have similar phone numbers with you. I cannot tell you what technique we are using, because if any of these guys are watching, that technique would no longer be effective. That is an example of spoofing where actually, if you are smart about how you go about it, you can block those calls.

I do not have an opinion on enforcement, but in terms of what the FCC and FTC have been doing, as a newcomer to D.C., we are pretty much held up in our tech bubble on the west coast most of the time. It has been really nice to see what an effective spark took place a couple years ago here. All sorts of good conversation around spoofing and action has taken place now. I am a little bit concerned about there being too much discourse about coverage, or the ability to detect these bad callers, and maybe not as much on the false positives. We are taking a very long-term view and I want there to be as much innovation and solutions available to customers. I think there was an example just recently with a self-driving car hitting someone. Now that has shut down innovation temporarily for self driving cars. I can think of all sorts of awful scenarios that would take place if too many calls are blocked. I am not going to give specific examples, but some of them are actually life and death. I do not think that it is necessarily the government’s role to enforce how this happens, but just elevating the cost of false positives more into the discussion would be healthy to make sure that innovation will continue in the long run as rapidly as possible.

Watch the full forum by clicking the video below: 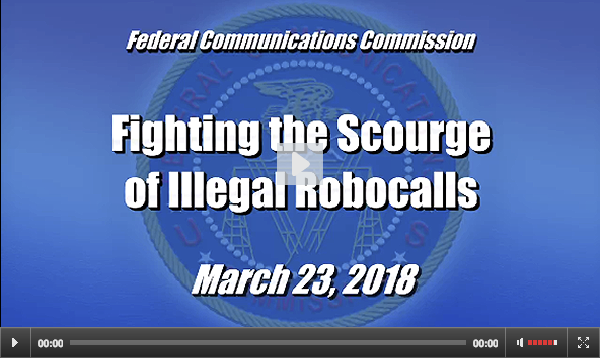